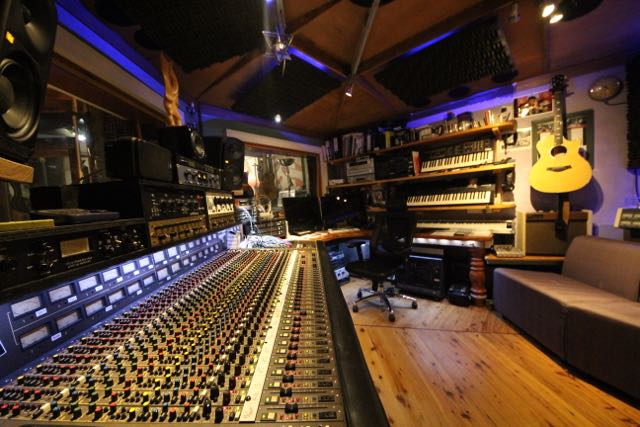 Underfoot Studios is a small but well equipped recording environment built and visioned into being by producer/songwriter Mic. Hardwick.

The studio’s unique tonal signature, of warmth and clarity, derives from combining classic with current technology. Underfoot brings together digital interfaces and a comprehensive collection of valve preamps, dynamics and Eq’s. as well as a number of hand built solid state preamps, dynamics, and Eq’s. Purpose built and lovingly crafted from the ground out in recycled timbers, and glass, the studio consists of the control room, and 4 recording spaces; made up of 2 small isolation booths, 1 live and 1 dead, the drum room (come performance space) and a smaller performance space suited to solo guitar and voice work. The flexibility allows bands to play and record live, or create the more typical layered recordings of each instrument, track by track.

All in all a very capable recording work environment, that is both inspired and inspiring.

Though largely self-taught, Mic. Hardwick did complete studies in Audio Engineering, gaining the Diploma, (and making his Mum happy) at the then fledgling SAE in 1987. Mic. had a gift for pulling a great live sound, and the hundreds of recordings he made of the Club Acoustica Shows are a treasure trove of special moments. He began recording his own songs in the mid 80’s, creating Studio Ver. 1.0- a Tascam 144 Portastudio, on his lap, on the bed, in a small North Sydney flat, with one door and no sound proofing. Then came the Otari 1/2” 8 track, coupled to a Soundcraft console, Studio Ver. 2.0, in a room of it’s own, at the back of the house, this saw several revisions, Versions 2.1 – 2.3, many years and many recordings. Until 1999, after Ver. 3.0 went up in smoke and burning to the ground-Today’s Version 3.1 was dreamed into a phoenix like reality and built with the help of a number of talented friends.

(Credits: Paul built the shell. Terry built the internal masonry. Dave and Bradford assisted Mic. to construct the sound management systems, the inner timber finishes as well as the crucial air conditioning. The studio’s wiring was installed by Dave S, who legend has it was formerly engaged to work for NASA on electronic systems involved in the space shuttle, (the studio only fly’s acoustically!). So with all the physical elements in place Mic. commissioned the studio with the help of a number of very patient musicians who donated their time and notes while the bugs were ironed out.)

Today the Underfoot Studio is a hub for the development of song. It continues to evolve, bringing current and classic methods, understanding, skill and occasionally a touch of magic to the original artists produced by Mic. Hardwick, and ultimately released through Underfoot Records.