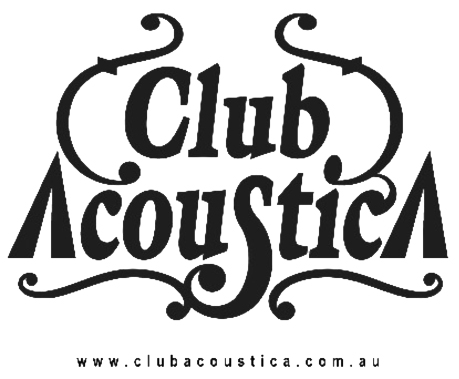 Launched in 1998  Club Acoustica was a unique music event much loved by artists, industry and punters. It was an A&R treasure trove, a first start for the earnest songwriter and a place where music lovers went to listen. Sadly after ten years of inspired and feverish event creation the team needed to let it go. It had been a work of love that never quite made itself big enough to stand-alone and support it’s  core team. But we were and are still proud of the event and can’t let it simply vanish. Clicking on the logo will take you to the site as it was. In the early years of this millennium the site was state of the art – providing a full database of performers, shows, sounds and links, which were later harvested into the Australian National Film and Sound- Networked Media Archive. The site provides a detailed snapshot of the Australian independent music scene in the 90’s and ‘00’s. So wander through and enjoy, discover those artists who have achieved wide acclaim in the Australian music industry today, like Sarah Blasko, Jeff Duff, The Beautiful Girls, Lyn Bowtell and Luke O’Shea. Find out why Nigel Kennedy thought it a great place to stop by on an Australian tour, and why established artists of the day used it to get close to their audiences. Underfoot Records has a sound recording of every performance, by every Club Acoustica artist. We are looking forward to being able to bring those sounds to you in the near future, Artists and technology willing. Step in, step back in time, unamp and enjoy.

Club Acoustica was widely credited for the “renaissance” of original music in Sydney. Begun in 1998, Club Acoustica was born of a shared vision to create a recognised and revered performance space for original singers, songwriters and musicians to present their words and music, to an audience who had come to listen. At it’s peak Club Acoustica had showcase events occurring in Sydney, Parramatta, Melbourne,Brisbane, The Gold Coast and Adelaide. The scope and reach of Club Acoustica was as much a testament to the depth of quality artists in Australia at the time, as to the initial organic vision of Mic. Hardwick, combined with the music and media passions of business partner Martin Contempree. Around them they gathered a team of passionate individuals who gave their time and energy for the love of music  and for little monetary reward.

Club Acoustica  was a simple response to a vexing question: “Where is there a dedicated space in Sydney where songwriters can present their wares to an intimate, captive audience”? The Stayin’ Alive NSW report by Ausmusic in 1993 noted that the suburban Sydney pub as a rock venue had “all but disappeared”. 1998 the year Club Acoustica began saw Sydney many venues for live original music closing. Changes in audience tastes, and the exuberance with which many venue operators had pulled out their stages and replaced them with walls of poker machines and pool tables, saw the steady closure of more than half of Sydney’s old venues. Sydney was and still is full of talented songwriters who needed to perform live, to develop their craft, to begin to gain an appreciative fan base. Founder Mic. Hardwick found the first venue by chance – La Fabulosa,(now Ruby Rabbit), newly established and actually wanting live original entertainment. He took on Sunday nights, he took the quiet night of the week, as it offered no great financial risk to the owners, and there were no competing events in other venues. He undertook to deliver an evening of quality, original music performances. The upstairs room had a small inhouse PA system, and the intimate nature of the space meant that a little was a lot. So the night became acoustic. The sound was controllable and a balanced sonic environment could be created into which each musician could perform, create and muse. The first Club Acoustica show was launched in August 1998, and continued seeing a steady rise in profile nationally, and inroads globally, until it’s last event on Sunday March 8th , 2008.