“Vote For Us” a high energy musical antidote for the endless repeats of political mudslinging. The animated video by celebrated Australian political cartoonist Matt Bisset-Johnson spotlights the May 2019 Australian Federal Elections, complete with dancing Koalas and caricatures of the most controversial candidates. Blah Blah Blah’s song, “Vote For Us” could be transposed as the anthem for disillusioned voters, anywhere in the globe – Democracy why hast though forsaken us?

Blah Blah Blah lived in Sydney in late 1984, growing a loyal following across the thriving Sydney/Wollongong pub scene, until they imploded in 1991. The debut single, Changing Times, was released on vinyl in 1985, followed by the cult classics The Bob Hawke Walk and Nuclear Warships, both receiving love, support and airplay on national radio station Double J. 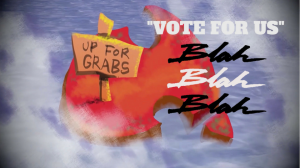 The lyrics penned mostly by Brett Power were in many ways ahead of their time – speaking to climate change, combative politics and social injustice. In 1987 the ABC music program “Beatbox” made The Blahs “Band of the Week”, which gave rise to the recording of “Suburban Suburb Syndrome” and the creation of a film-clip for said song by the ABC team.

In 1988 Andrew Denton aired his first TV series, he called it “The Blah Blah Blah Show”. After a little name owning negotiation, The Blahs were invited to write the theme song, do a live performance and on the last episode of the first series, the infamous marriage episode, Blah Bass player Mic. Hardwick was interviewed. It all seemed rosy for the band- but truth be told the “The Blah Blah Blah Show”, and the coincidence of Iggy Pop’s album of the day being called “Blah Blah Blah”, confused the waters.

“Vote for Us” was recorded in 1989 at Paradise Studios for the album “Remember”. The band imploded shortly after the completion of the project, at the time, irreconcilable. As a result, these recordings, were never properly released. Despite new lineup attempts the band never really recovered, they stopped playing shows and the recordings were shelved. Thought lost when fire ravaged the Underfoot Studios in 1999. It turned out years later that a few tape masters were salvageable. The original tapes were baked and given one last chance for life in the digital world before crumbling away to tape heaven. Now remastered and, in some cases, edited for this 2019 release the ghost of Blah Blah Blah returns to spread its irreverence across your airwaves.